The New Haven County Courthouse is located in the Downtown of New Haven, Connecticut. It has been a prominent and stately presence on the New Haven Green since its opening in 1914.The New Haven County Courthouse at the corner of Elm and Church Streets, was one of a handful of buildings commissioned by New Haven County to bolster its City Beautiful movement. Modeled after St. George’s Hall in Liverpool, England, the courthouse was designed by New Haven architects William Allen and Richard Williams. The building’s design infused Beaux-Arts principles in
a Neo-classical style. Construction began in 1909 and five years later, at a cost of $1.3 million, the structure was completed. It officially opened its doors on March 24, 1914. Statuary in front of the Courthouse by noted sculptor J. Massey Rhind and murals and lunettes inside by famed early 20th Century painter T. Thomas Gilbert help give the imposing building its aesthetic appeal. Today it serves as the Geographical Area #23 Courthouse. The building added to the National Register of Historic Places on May 16, 2003

Grand Light was selected to restore the massive front entry lanterns to their original glory. These massive cast bronze fixtures are 65″ tall and 30″ wide and are estimated to weigh 400 pounds each when fully assembled. The restoration of these fixtures included mechanical repairs, rewiring, and refinishing of all the fixture components. Grand Light created a special recipe to replicate the original red rust hot patina finish. This original finish was also discovered after removal of the black paint not only on the lanterns, but the on large entry way doors and arches as well. 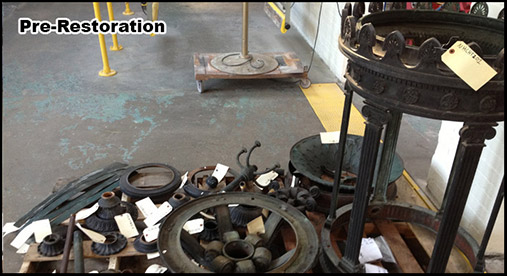 The fixtures were brought to us in the condition shown above. During some point in their lifetime, the original  patina had begun to break down causing the bronze to Verde. At that point the fixtures were painted black in order to cover up this natural aging process.

Prior to beginning work to the fixtures, they were inspected, documented, completely disassembled and tested to determine original finish. Grand Light artisans began removing the existing finish layers. After several hours of layer removal, an original red rust patina was revealed. Generally we are able to save underlying, original finishes, however in this case, it was too far gone. Grand Light artisans were able to formulate a custom recipe to achieve the original hot patina finish. This custom red rust patina would require four key step;

(1)  Remove all surface residue with an abrasive Media blast.

(2) Application of a statuary bronze hot patina and a slight burnish to revel bronze highlights.

(3) Heat the individual components to 200 degrees Fahrenheit and apply the custom formulated red rust patina by hand, then cooled to room temperature and burnished back to give them a three dimensional, polychrome look.

(4) Three separate light applications of a Smithsonian grade lacquer which would protect this gorgeous finish from the exposure to the harsh elements. 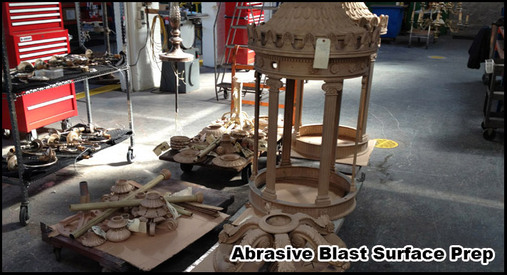 A close up of media blasted components.

Bronze attributes reveled during burnishing accent the components giving them a three dimension look. This is an intricate process as it sets the stage for the third step on application of the custom red rust patina and the final outcome. 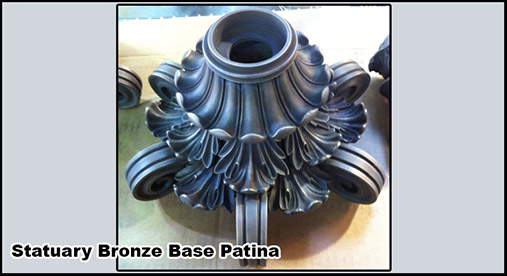 Shown is a component upon completion and burnishing of the statuary bronze base finish. Once each of the 78 components look like the picture above, Grand light artisans proceed to step 3, which is the application of the custom red rust patina, which is the final patina application to achieve the desired finish. Below shows the process by which each component begins their transformation from statuary bronze to red rust.

Shown here is a before and after of both steps 2 and 3.

In order for the red rust patina to patinate the metal, even heat and a constant temperature are critical in achieving consistent coverage and general appearance. Shown above is a fixture cages which is sitting in our infra-red oven until it reaches a uniform temperature of 200 degrees Fahrenheit. 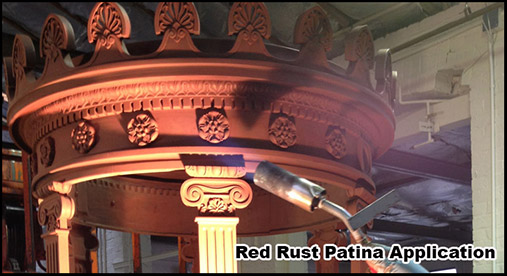 After pre-heating, Grand Light artisans utilize torches and temperature monitoring to apply the custom red rust patina formula to the fixtures. The application is very tedious work and complete focus and attention to detail are critical. Below you can see how our artisans are applying the patina. There were three artisans assigned to each fixture frame during this process.

After the red rust patina is applied to the components, they are again burnished and revel the bronze highlights and inspected for finish consistency.

The final step in the finish restoration process is the application of a special blended Smithsonian grade satin lacquer to protect the beautiful, hand applied finish. Components cure for 3 days and then the lanterns are assembled and crated to be delivered back to the Courthouse where they will be continue to be in service for decades to come. 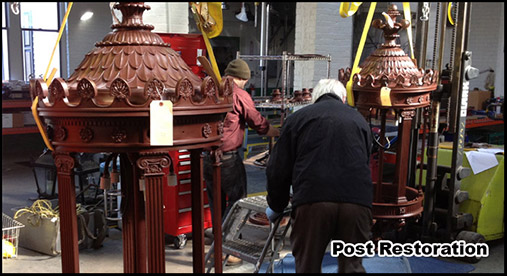 All of the lantern body components installed and final inspection being preformed.

For more information Regarding this project and the fixture types, you may review the project Homepage at New Haven Courthouse Exterior Light Restoration

For further information regarding this project you may contact our project manager:

Unitarian Church Of All Souls 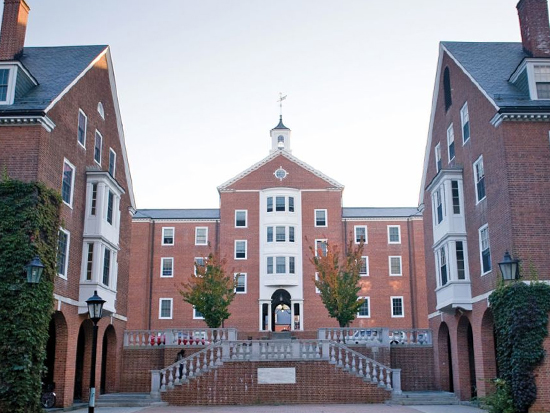