New Haven, CT – After weeks of structural repairs, modifications, cleaning, and rewiring the large crystal chandelier for the Holy Trinity Orthodox Church is nearly complete and ready to be re-assembled in the church by the Grand Light team.

This chandelier required several steps in its restoration. The entire fixture was cleaned and a protective coat of UV resistant renaissance wax was hand applied. Each crystal component was inspected and where necessary, re-pinned. In several instances the crystal graduated chains were damaged and many repairs preformed over the years with household items. These chains were corrected and an additional 11 sets of graduated chains were fabricated to replace missing chains. The entire fixture was rewired using UL listed components and was  tested in accordance with UL standards. The massive brass chain supporting the fixture had layers of paint which were removed and was sprayed with lacquer to preserve its natural aged brass finish. There were minor structural issues with the frame, such as wire ties supporting components and broken arms. All of which were corrected in accordance with the standards utilized during its original fabrication. Significant modifications were made to the top portion of the chandelier where was designed to provide up light into the churches decorative dome. Grand light designed a discreet and functional three light system to provide an enhanced and controllable lighting approach for the dome.

Shown in this picture is the upper tier of the chandelier. There are various stars that have been added as they had been vacant in those areas for years. Also shown are the connections of multiple circuits, and the attention to the detail in order to assure that these circuits are not compromised. 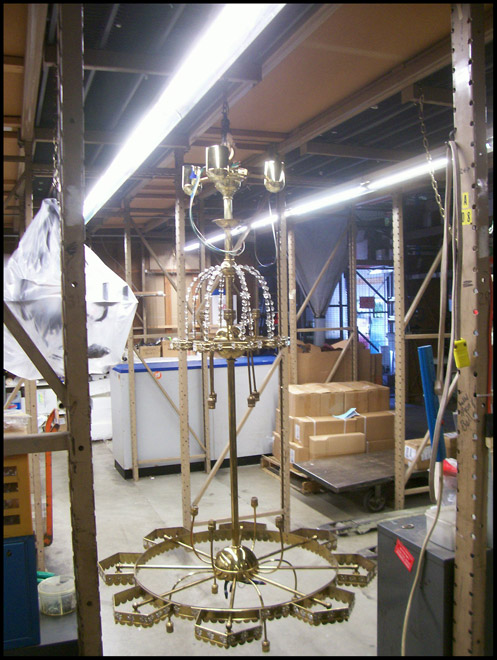 Shown here is the completed frame and the modified down light. This fixture will next be packaged and loaded in to the Grand Light Trailer to be delivered to the church, as well as re-assembled on site.

Pictured are the results of the cleaning, striping and application of the lacquer top coat to the existing chain.

Shown is the modified canopy which will allow the church to accent their decorative dome which is directly above the chandelier.

The cleaned crystal strands from the upper and lower tiers of the chandelier is inspected and re-pinned where necessary.

Show are the complete strands prior to being packed up for delivery and re-assembly at the church.