The Hudson County Courthouse or Justice William J. Brennan Courthouse is a six story building located in Jersey City, New Jersey. This structure was designed by Hugh Roberts in the Beaux-Arts architectural style and built with granite between 1906 and 1910 on property obtained from fourteen separate property owners between 1905 and 1914. Construction of the building was done by the Wells Brothers and construction of the interiors and finishes were by John Gill & Son. The Hudson County Board of Chosen Freeholders renamed the courthouse in 1984 in honor of Associate Supreme Court Justice William J. Brennan, who had served in the building as Hudson County Assignment Judge from 1947 through 1951. 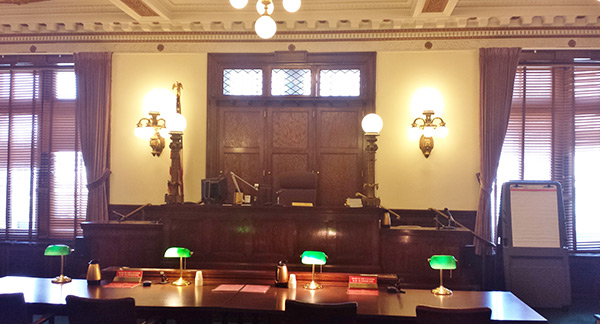 Grand Light will be fabricating custom replications of a chandelier, wall sconce, and torchiere that is original to the building. One of each type of lighting fixture was removed on-site and delivered to Grand Light’s lighting restoration and custom lighting manufacturing facility in Seymour, Connecticut.

The replications of these fixtures were to include the use of existing molds and patterns for the different components of each fixture. However upon inspection, only a small amount of these molds and patterns were usable. In order to accurately replicate the intricate metalwork and detailing of each fixture, custom replicated components will be cast using the lost wax method of replication. 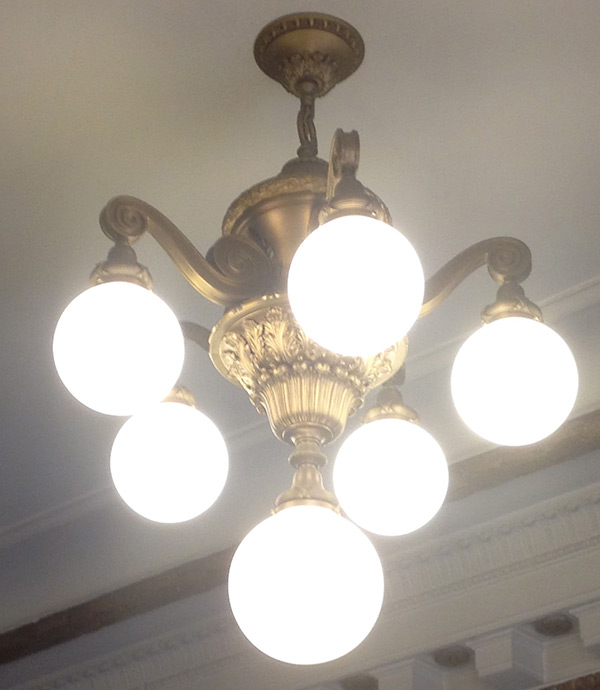 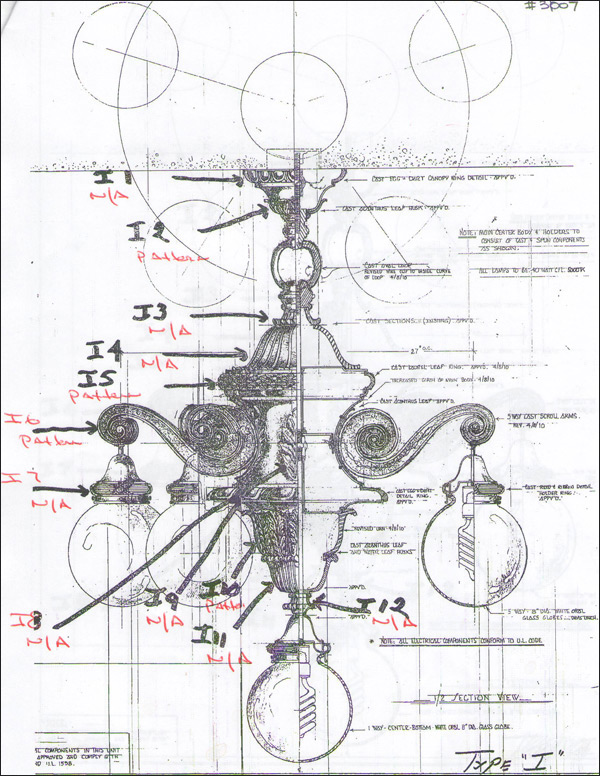 The historic bronze chandelier was inspected and documented upon arrival at the Grand Light facility. Existing historic documentation is reviewed, including the above original historic sketch, which was used to assure historical accuracy is upheld when designing and fabricating the fixture replications. Further inspection of the existing patterns and molds revealed the majority were unusable due to damage or cracks throughout the filigree and loss of detail present on the original components.

The fixtures finish consisted of a combination of a light gold patina with a matte lacquer top coat and certain structural elements painted in a gold finish to closely match the patina. Grand Light will develop a custom patina recipe to replicate and match the existing chandeliers’ finish. 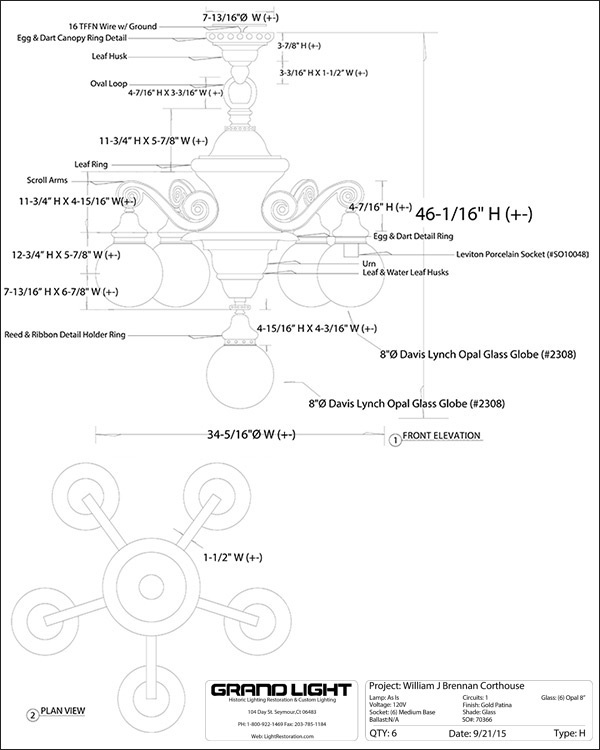 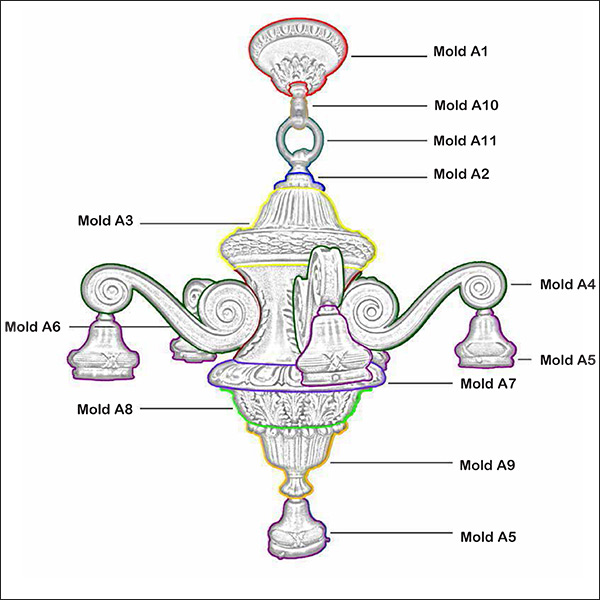 To assist in the fabrication process, a shop drawing is created along with a new mold configuration diagram. During inspection it was discovered that the original chandelier had a number of mechanical deficiencies that were recommended to be corrected in the replications. The chandelier’s arms were too heavy to be supported on the spinning and had spacers added to prevent dimpling. This weight also contributed to fitment issues between the arms and body. Current bobeche on the original chandelier had been made in two parts and assembled with an internal brace in order to support socket and globe. Unfortunately this assembly had provided unnecessary flex when the globe was attached.

It was decided to cast the spinning elements and combining cast components to greatly improve the chandelier’s structural integrity, overall appearance, and existing assembly deficiencies. Casting of the bobesche components would eliminate the brace, improve rigidity of the holes, and strengthen the structural integrity. Holes will be added for adequate venting while thickness of the casting will be adjusted to make sure the weight limit is not exceeded. 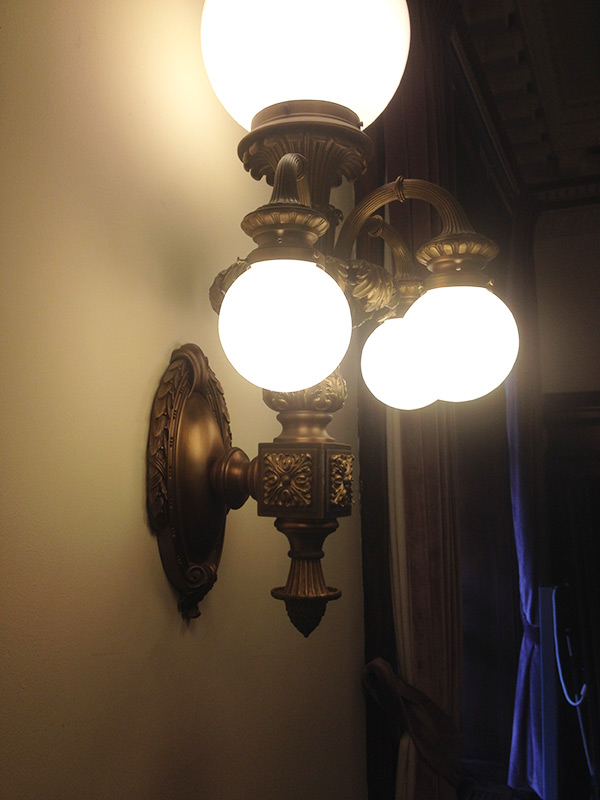 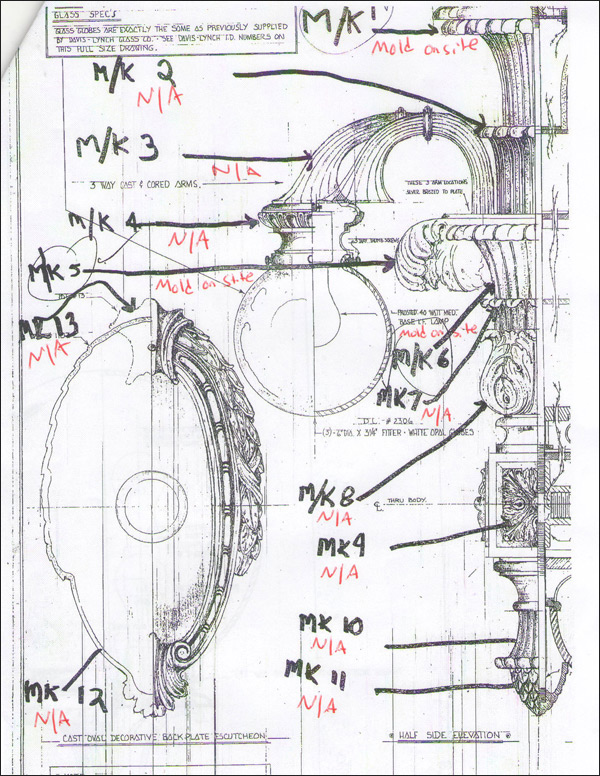 Existing historic documentation of the courtroom wall sconce was reviewed prior to the fixtures arrival at Grand Light. Further inspection and documentation of the existing molds revealed that one of the molds is usable in the lost wax replication process and would not require any altering during the wax process, while the majority were not usable due to rubber breakdown, deformities in the rubber, or a fair amount of work would be required to correctly shape the mold during the wax process.

The fixtures finish consisted of a combination of a light gold patina with a matte lacquer top coat and certain structural elements painted in a gold finish to closely match the patina. Grand Light will develop a custom patina recipe to replicate and match the existing wall sconces’ finish. 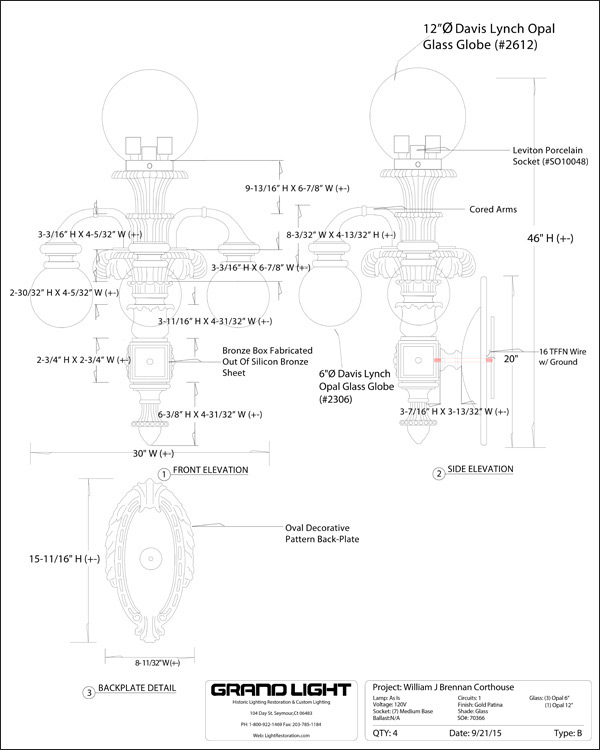 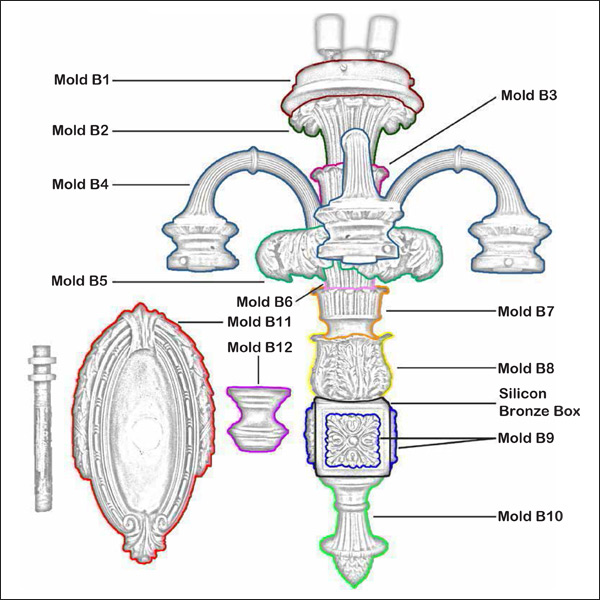 To assist in the fabrication process, a shop drawing is created along with a new mold configuration diagram. During inspection of the original fixture, it was discovered that individual components are fastened with a screw, creating a loose fit and not flush to other elements on the casting. Grand Light specialists will cast the spinning elements and combining cast components (ie. filigree attached with screws, etc.) to greatly improve the sconce’s structural integrity, overall appearance, and existing assembly deficiencies. 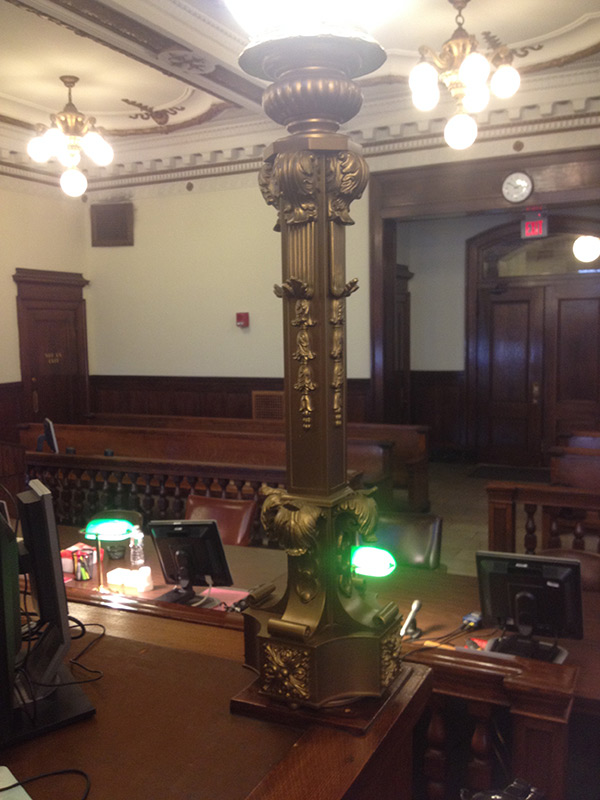 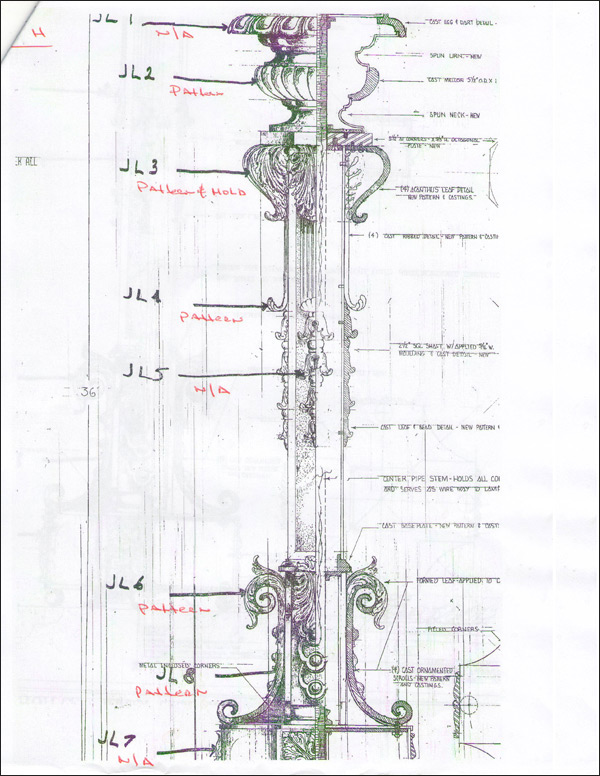 Existing historic documentation, including a sketch of the historic torchiere, is reviewed and used to assure historical accuracy is upheld when designing and fabricating the fixture replications. While inspection of the existing patterns revealed they were in good condition, if used in the replication process the replication will not scale to the missing original molds or patterns. The original fixtures current finish is a painted gold finish. The light gold patina present on all the other courthouse fixtures is not present on any torchiere component. 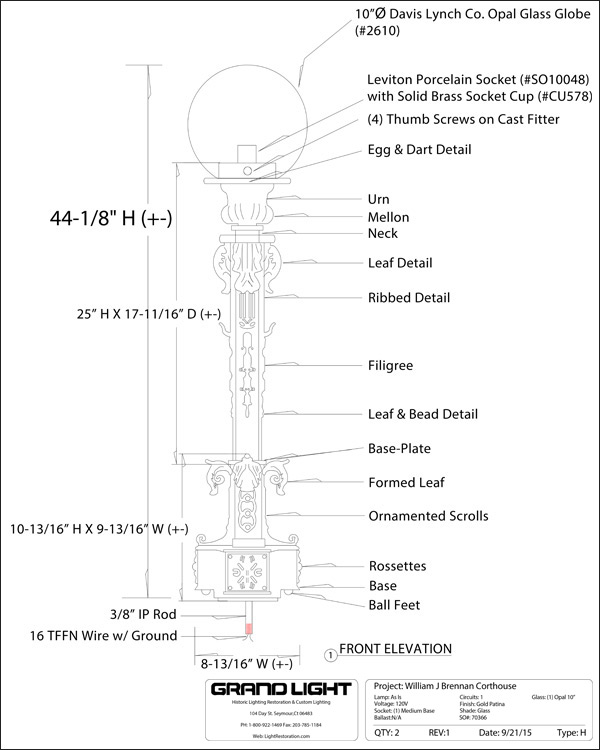 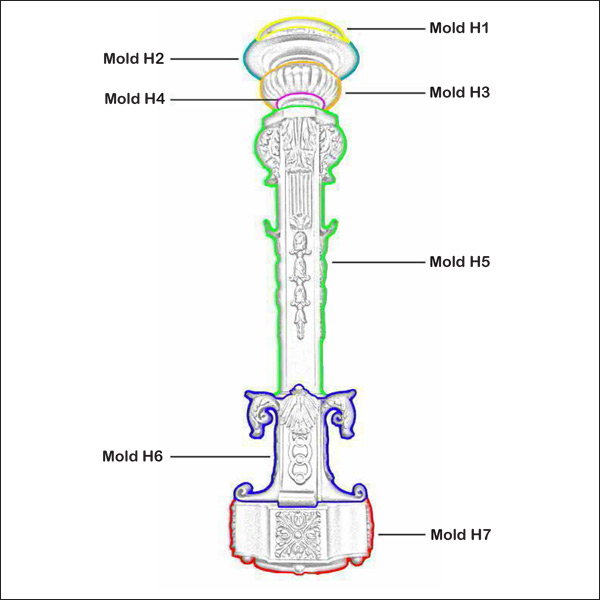 To assist in the fabrication process, a shop drawing is created along with a new mold configuration diagram. During inspection of the original fixture, it was discovered that Type J/L6 casted pieces differ on base and bronze plate was added in areas to fill. Grand Light specialists will cast as one piece and correct deficiencies when they are in wax.

Once all fixtures were thoroughly inspected and documented, a report is submitted to the client for approval, including the status of the molds/patterns, deficiency evaluation, new mold configuration. and an assembly/wiring diagram. Once these documents have been approved, the original fixtures will be disassembled and production will begin on creating new patterns using the lost wax method of replication.

Grand Light specializes in the restoration of historical luminaires of every scale, material, finish, and design. From professional diagrams and plans for your project to rewiring fixtures to UL standards, our specialists have proven their reputation as exceptional lighting restorers.

For more information regarding this project, you may review the project homepage at Hudson County Courthouse.