Following the approval of the prototype chandelier restoration, Grand Light’s restoration team is nearing completion of the remaining nine fixtures from the auditorium at Washington Irving Intermediate School and is preparing to ship them back to Tarrytown, NY.

After our prototype had been approved by the client, the remaining nine fixtures were disassembled down to individual pieces. We then inspected each component for any signs of structural damage and weakness and made any repairs necessary before we began to refinish the components for the remaining nine chandeliers.

Although all ten fixtures underwent a complete restoration, Grand Light’s team actually worked ahead of schedule and is expecting to ship the antique’s earlier than initially thought.

The individual components of the chandelier prior to being stripped & refinished. 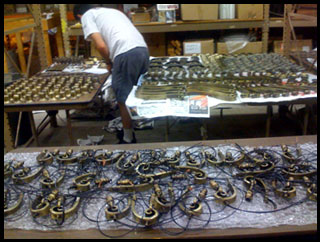 Finished components being staged for final assembly in our workshop. They are undergoing final inspection before the chandeliers begin to be re-assembled. 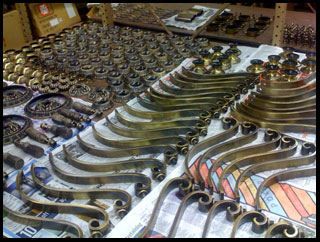 Another photo of the antique brass chandelier components. These components are the upper half of the chandelier, as well as the bottom finials and cast pieces which screw into the light socket sleves. 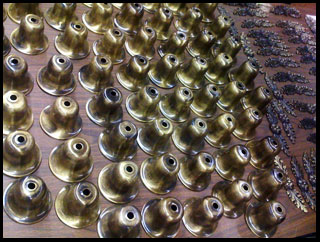